Credit Card Grows; but not Enough

The  U.S. credit card industry at large, is currently experiencing historically low charge-offs as a result of factors related to the recent recession. In the coming years, credit charge-offs should move gradually higher toward a more steady 4% to 5% but that will take more than 3 years to reach that level.

After the financial crisis, leading U.S. credit card companies scaled back its loan growth and shifted focus back on its more “spendcentric” business model, with additional revenue growth coming internationally and from fee income initiatives. Credit card companies’ core charge card business and new fee-based revenue areas come with minimal credit risk. The current growth, while it is not hovering at the high double-digit pace like during the pre-crisis, it has a much lower risk profile. A strong double-digit growth is needed in billed business to merit a multiple expansion. A modest GDP growth is therefore expected in the near term given the historical relationship between billed business and GDP.

Billed business growth is highly correlated with GDP than consumer wealth. GDP expectations are forecast to climb into mid-to-high single digit growth in the near term. Given the maturity of the US credit card industry, the continued growth in credit card billings will come from incremental spending among its affluent customer base rather than increased penetration within the US consumer market. Affluent consumer spending trends are more highly correlated with macroeconomic factors such as GDP than any other potential factors such as tax rates or wealth effects. The Big Three credit card companies in the U.S. have previously stated that they have not seen any significant impact on customer spending from tax increases that went into effect earlier this year.

The chart below shows that the relationship between billed business growth and U.S. wealth (networth) has recently decoupled.

From years 2000 to 2011, credit card billings have grown about four times the pace of U.S. real GDP growth and that this  trend is expected to deviate substantially from past. Growth in U.S. billings has held up relatively well which posted a high single-digit growth over the last four quarters despite the tepid U.S. economic growth. Based on economist’s forecasts, they expect mid-to-high single-digit billed business growth on the assumption that GDP growth will bottom 1.5%  Y/Y towards the third quarter of 2013. The decline in GDP forecast is due to the effects of fiscal tightening which may climb to levels that are more modest in 2014 as the economic drag wears off.

Between 1995 to 2Q12 US, billed business grew at an average of 1.3X overall wealth growth. Over the last three quarters, that figure has decreased to around 0.7X billed business growth per increase in wealth. The change is attributable to two factors:

Household net worth is a primary driver of the big credit card companies in the U.S. However, the correlation between net worth and billed business growth is much lower than the correlation between GDP and billed business growth. Some analysts argue that double-digit increases in net worth should drive strong billings growth going forward. Previous quarters however where net worth growth was in the low single digits, billings growth was in the high single digits, indicating the relationship is not as strong as some believe. It can be inferred that based from this trends,  the change in real GDP is a better long-term indicator of US  credit card companies’ billings growth, which implies mid- to high single-digit growth.

Loan balances improved more than historical trends for the big three card companies, climbing 1.5% for American Express, and by 0.8% for Discover Financial Services,  while the banks gave up share in May (-0.3% on average).  Loan growth came in well below as compared to last month.

Master Trust data showed the three card companies grow loans ahead of seasonal trends, rebounding from a weaker April. Credit trends continued to improve as well, with loss rates declining 25bp MoM vs. the 13bp increase typically seen in May. Past due rates saw 9 bps of declines for the cards, and 10 bps decline overall implying that losses should remain at low levels over the next several months.

American Express continues to deliver expense discipline and use other capital resources (buybacks, reserve release) to meet earnings expectations. That said, the stock is 18% higher from 1Q (vs. SPX +9%) and is now trading at 14.5X its forecasted 2014 EPS.

Fee income revenue goal of $3B appears challenging for American Express. It is currently generating $1.5B of fee revenues, or 50%, of its 2014 revenue goal of $3B. The company initially expected in 2010  that revenue growth would accelerate, and it believes that, given its higher expectations, the $3B in revenues remains a reasonable assumption. This growth is largely dependent on its ramp-up in initiatives such as Bluebird or Loyalty Partner. But given its revenue guidance of 41% CAGR, its revenue targets as more difficult to achieve. 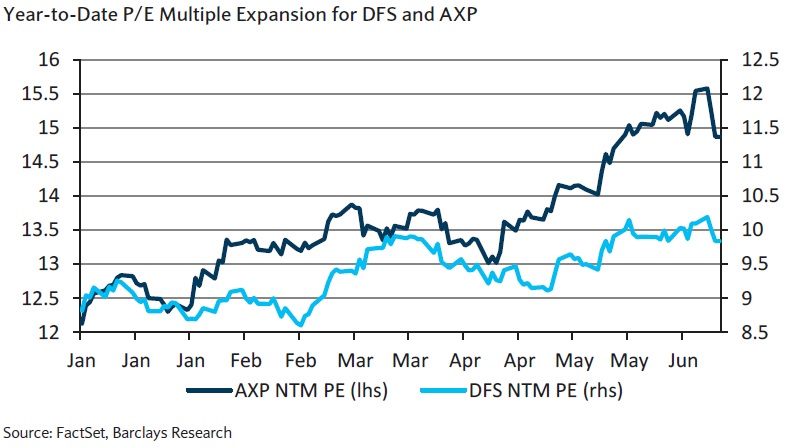 By the way, you can visit Your Personal Financial Mentor for more update information on credit cards. For example, you can learn more about how to use credit card effectively.