Home › Credit › What is a Credit Crunch?

What is a Credit Crunch? 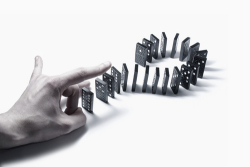 If investors take excessive risk, it can be a source of financial turmoil but insufficient risk taking can also disrupt credit and damage the financial markets during a financial crisis. Flight to quality also exposes the financial market to unexpected negative shocks. It increases the credit spread and leverage in the market. Some of the most liquid and safest assets may also face a sudden dry up in a risky asset market which ultimately deteriorates the economy.

The credit crunch is caused by a number of reasons. A sustained period of inappropriate and careless lending which causes huge losses for investors and financial institutions is one of the main reasons of credit crunch. Borrowers become insolvent and are unable to pay back the debt which causes loan to become sour, and ultimately exposes the full extent of bad debt suffered by the investors and other financial institutions. Another reason is the anticipated fall in the collateral value which is used by banks as a security against the loan. For example, the credit crunch is also caused when central banks impose new regulatory restrictions on lending or when they unexpectedly increase the reserve requirements.

Lending institutions and investors, who suffer losses, restrict the availability of credit and increase its cost by increasing the interest rates. It has also been observed that in times of the credit crunch, a lender is unable to give loans, even if he wishes to lend, as a result of loss suffered by him. Therefore, when you are looking forward to invest in a depressed financial market, you should seek guidance of Your Personal Financial Mentor in order to secure your investments and save yourself from the risk of suffering heavy losses.

« What is Oil ETF and its Benefits
What are Real Estate Notes and how They Work? »