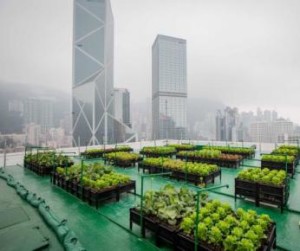 Hong Kong, 28 October 2014 – Atop of the Bank of America Tower in the heart of Central, Hong Kong’s district sits JLL’s urban farm, a truly unique spectacle amidst the huge skyscrapers bustling for position in the city’s financial hub. The urban farm was created in collaboration with JLL’s long-term partner Bank of America, and benefits from the close guidance of social enterprises Time to Grow and Sowers Exchange.

Now over a year old, the creation of the urban farm was achieved with the help of many conscientious volunteers, who ensured the farm could survive a few Hong Kong typhoons and heavy rain! It was also important to make sure the farm benefitted from direct water access and as much sunlight as possible. Eventually, the volunteers were able to plant hundreds of seeds, which have seen the farm producing lettuces and radishes up to this day.

JLL’s continued aim for the farm is to raise awareness about the potential to make Hong Kong a more liveable, healthy and sustainable city. As well as being a lot of fun, the roof top farm should encourage more people to purchase and consume locally sourced green products. As much as anything, it is about closing the gap between people and the food they eat because, in Hong Kong, the vast majority of food is imported from overseas.

Tammy Hoy, Senior Marketing Manager at JLL, Hong Kong, said: “We are so pleased to see the continued success of the roof top farm, and we’d like to thank our partners for the vital part they have played in this accomplishment. The urban farm will send a very important message to the community in Hong Kong, particularly those working or living in urban areas such as Central. It has been a pleasure to with the many volunteers who have dedicated their time to the farm in support of a greener Hong Kong.”

JLL’s roof top farm is over 300 square metres, making it one of the largest farms on top of a commercial property in Hong Kong. It is especially unique for the city given its location within Central Hong Kong. The shared aim of JLL and Time to Grow is to encourage Hong Kong to follow the example of other cities which have led the way in this regard. The benefits urban farming can bring to communities can be seen across the world, including in Havana, Cuba, which has almost 200 urban allotments which provide four million tonnes of vegetables each year.

« Buying An Apartment Complex? Make Sure You Take On Board These Dynamite Tips!
Career Options in the Accounting Industry »