ROEs Likely to Remain Compressed for US Life Insurers

Life insurers continue to face challenges from low interest rate and modest organic top-line growth. Back in the year 2012, the projection for the industry was positive this year as it seemed life insurers would absorb the impact of low rates and still manage to generate solid earnings growth and some ROE expansion. The projection for the Life Insurance industry in December was neutral partly because of the impact of sustained low interest rates will likely be a persistent drag on EPS growth, as well as raising hedging costs, especially for variable annuities. In addition, it is a likelihood that share buybacks will be constrained for some of the largest life insurers including PRU, MET and AIG until clarification on non-bank SIFI rules are made.

Currently, Life Insurers trade at 8.2x 2013E EPS and 1.0x trailing book value ex-AOCI which, even though low, appears reasonable judging from elevated costs of capital. If interest rates do not rise significantly and equity markets keep climbing, then valuations are not likely to expand significantly in the near term due to continued headwinds on core earnings and ROE. Within the U.S Insurance, P&C Insurance Stocks is recommended over Life. P&C insurance benefits from pricing power, plenty of free cash for share buybacks, and less exposure to low interest rates. In the meantime, life insurers continue to face headwinds from sustained low interest rates, increased regulation, and a slow economic recovery.

The life insurance stocks currently trade at a discount valuation to P&C insurers; it widened in 2012. The valuation discount for life stocks is higher on P/E than price-to-book. The projection is a higher valuation being awarded to P&C stocks because, comparison with life insurers, P&C insurers have lower asset leverage, less exposure to sustained low interest rates, and more deployable excess capital.  Within the whole U.S Insurance industry, the top picks are ACE, TRV, XL, and CB. The overweight-rated stocks in the Life Insurance industry are AMP, AFL and UNM in large cap and TMK, and RGA in small small-mid cap. SYA and LNC are underweight mainly because of their elevated exposure to low interest rates.

The outlook is lackluster for the life insurance industry because ROEs are likely to remain compressed due to headwinds from low interest rates and modest organic top-line growth. Increased Fed regulation for some of the large insurers like PRU, AIG and PRU could restrain share buybacks for these companies in 2013 or even beyond. Trading for Life Insurers currently stand at 8.2x 2013E EPS and 1.0X book value ex-AOCI which, even though depressed, appears reasonable based on elevated costs of capital. If interest rates do not rise and equity markets keep climbing, then valuations are unlikely to expand significantly in the near term due to consistent headwinds on core earnings and ROE.

Modest earnings growth and stable ROEs is expected for the life insurers in the next several years, showing continued pressure from low interest rates. The outlook is for median EPS growth of %8 in 2013 and %9 in 2014. The forecast is AMP, TMK, PFG and PRU could experience the fastest earnings growth through 2014. The median ROE could be about 11% through 2014 with AMP showing the most expansion from an already elevated level. It is a likely the life insurance industry will not recover to pre-crisis peak levels of 14% resulting from sustained low interest rates, less aggressive capital management actions, as well de-risking and de-levering of investment portfolios.

Through 2014, the median ROE for life insurers should be reasonable at 11%. This shows that international growth offsets lower US returns for some insurers. Life insurers’ risk-based capital (RBC) ratios are stable. Cash flow generated should be deployed for share buybacks by the most of the life insurers.

Non-bank SIFI candidates like PRUI, AIG and PRUI are likely to be restrained in pursuing share buybacks in 2013, and even beyond, as a result of Fed oversight. These companies will likely be designated global non-bank SIFIs. The insurers will be required to carry extra capital only for non-traditional non-insurance businesses such as variable annuities instead of implementing across-the board charges on the whole balance sheets. This is an increment positive development for MET, AIG and PRU. The projection is companies AMP, UNM, TMK and PFG can buy back the largest amounts of stock relative to capital. 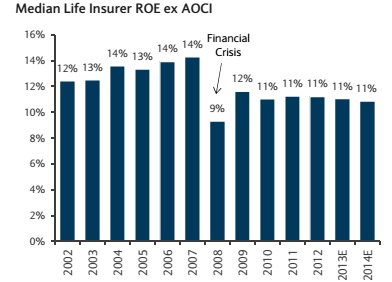 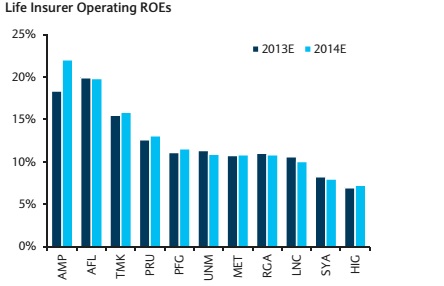 Life Insurers’ valuations are currently low, comparative to historical levels, at an average 2013 P/E of 8.2x and 1.0X trailing book value excluding collected other comprehensive interest. The negligible risk is limited based on the historical low valuation multiples. Expectation is valuations are unlikely to expand significantly in the near term due to persistent headwinds from low interest rate on earnings and ROE we well as foreseen increases in regulatory oversight for Fed-regulated life insurers.

The below average life insurance valuations is attributed to expectations that the group’s normalized ROE probably will not recover to past highs in the near future and also concerns about low-interest rates and variable annuity policy guarantees, which are likely to be alleviated  in the near term. Life insurer’s ROE currently is below pre-crisis levels due to reduced invested asset leverage, lower investment yields, and increased capital requirements.

The life insurance stocks now trade at a discount valuation to P&C insurers. This gap grew wide in 2012. In P&E, the valuation discount for life stocks is higher comparative to book. Higher valuation is given to P&C stocks because, comparative to life insurers, P&C insurers have lower asset leverage, more deployable excess capital and less exposure to sustained low interest.