The importance oil holds to the modern world is unique in character and far-reaching in scope. Oil is a singularly autonomous variable in the world economy and it is used inter alia for heating, production and transportation. As such, the availability of oil and prices thus affect the global output capacity, rate of growth, and level of inflation. Hence, fluctuations of oil prices can result in significant macroeconomic repercussions. Sharply higher oil prices can result in in difficult economic challenges for oil importing economies since it can slow economic growth while stocking inflation. It is for this reason that there is the need to study oil prices.

Interest in understanding oil commodity market price developments was low In the eighties and nineties mainly because prices remained relatively low and stable in nominal and real terms. But, beginning 2000, interest in oil price developments reemerged as prices started to experience a firm upward trend. Since then to date, the upward trend has become a common phenomenon. The relatively dramatic and exceptional movements in oil prices have reignited interest into wanting to know what drives oil prices. There are several academic and policy debate that have put forward several possible factors. However, no consensus seems to have been reached as to the relative weight that should be attributed to speculation versus fundamentals in driving oil prices.

Recent academic and policy debate seems to put-next to the geopolitical factor-forward three main possible factors that may result to upward movement in oil prices but no consensus seems to arise as to the relative importance of these factors. Some authors attribute the fundamentals and more specifically increased demand from fast growing developing countries, which are accounting for larger and larger shares of annual oil consumption growth, to be playing an important role. Large developing countries have been growing rapidly for years, and in some cases decades. Thus, a combination of rapid industrialization and higher commodity intensity of growth, coupled with rapid income per capita growth, has significantly increased their oil demand.

Additional liquidity and low interest rates have been contributing to the price increases. Low interest rates would result in expansion of money supply. They also decrease the demand for liquid assets by sovereigns like Dubai, China or Chile. Both effects eventually lead to an increase in prices. But not all prices will move at the same time as some prices are more flexible than others. The most flexible are the commodity prices. In addition to these fundamental explanations, speculations can contribute to upward movement in commodity prices. Speculators have been the source of both interest and controversy in recent years. Profitable speculation involves buying when the price is low and selling when the price is high.

Conventional theory forecasts that irrational speculators, who trade on the basis of irrelevant information, don’t survive in the market place. Speculative trading in future markets may significantly affect spot oil prices, but their overall importance is limited over time. However, some studies suggest that noise traders might have an impact on prices if they hold large share assets regardless of their survival in the long run. Such views hold increasing prominence due to the coincident rise in crude oil prices and the increased numbers of financial participants in the crude oil futures market.

Over the last decade, the volume of trading in financial instruments associated to oil has suddenly increased on both commodity exchanges and over-the-counter markets. For example, the open future positions held by financial traders grew sharply, from about 45, 000 contracts in 2nd half of 2000, to more than half a million futures in the first eight months of 2008. This is just an illustration that shows the market share of financial traders has more than doubled, from less than 20% of all open futures and futures-equivalent option positions in 2000 to over 40% in 2008.

The bottom line is speculators are not the main force pushing oil prices far above the level justified by fundamentals. If this was the case, excess supply would have been observed. Several factors may contribute to the rise in oil prices. There is no consensus to the relative weight that should be attributed to speculation versus fundamentals in driving oil prices. Taking all the pieces together in a coherent way, both financialization and rising demand from emerging markets could play a role in oil price movements. On this basis, an argument could be put forward that there are several agents active in the market with different beliefs or strategies. Their interaction determines the price formation in the market.

Future prices, in theory should be equal to the spot price plus the cost of carry, which is the sum of the cost of storage and the interest rate, and the convenience yield i.e. the benefit from holding spot oil which accrues to the owner of the spot commodity. The benefit of futures market is the process of competitive price discovery i.e. the use of futures prices for pricing spot market transactions through the timely incorporation into market prices of heterogeneous private information or heterogeneous interpretation of public information by way of trading activity. Nonetheless, the determination of the convenience yield and the role of futures prices in the price discovery process remains inconclusive.

Chart 3 showing how likely at each moment in time the fundamental-based versus speculative regime prevailed. 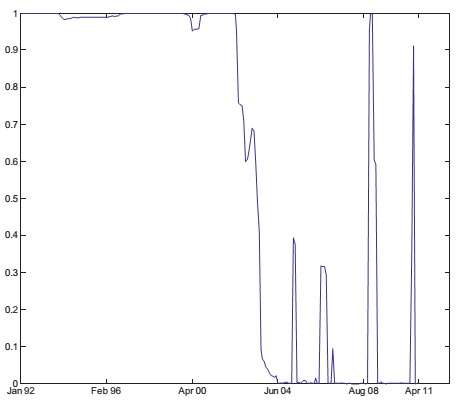 As can be seen, in the earlier period, between January 1992 and January 2004, the fundamental-based regime clearly prevailed. Since then, several regime switches have occurred. For most of the remaining sample period, it appears the speculative regime dominated market dynamics.

We have talked about the relative importance of fundamental and speculative demand on oil futures price levels and volatility. On one hand, if we have high fundamental volatility, high uncertainty about future oil demand, and the oil price deviation from fundamentals or the price trend is small, only commercial traders will enter the market. On the other hand, if there is a large unexpected shock to the oil spot price, all traders will enter the market. Changes in oil future prices are best explained by underlying fundamentals. Also you can visit Your Personal Financial Mentor for more update information on oil commodity market.