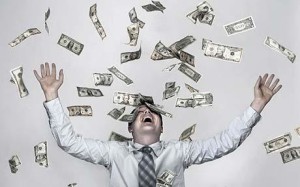 Windfalls are, by definition, sums of money that come into your possession unexpectedly. Generally, these sudden additions to to your personal wealth come in times of personal duress. You get a structured settlement….because you got injured and had to sue. You got an inheritance….because grandma passed away. It’s likely that, if you are unused to having large sums of money in your possession, you aren’t mentally prepared for the thrill and responsibility of it all. For this reason, it’s important to make a plan. Chances are, you’ll get an inheritance or windfall of some other type at least once in your life. It’s important that you make it count and last. But, sadly, most windfall recipients do neither of these things. Here are three ways that these folks tend to goof up their windfall opportunity, and how you can make sure you don’t do the same.

1)     They Tell Everyone They Know. Bad idea. Suddenly, previously innocuous relationships become poisonous when people come out of the woodwork asking you for a handout. This doesn’t make them bad people. It’s just human nature. “You’ve had a sudden misfortune and, you know…I’ve been working on this thing…and it’s almost ready and it’ll make me a lot of money…you too, if, you know…you want to invest a little bit of that money I know you have.” See how it happens? You don’t want any distant relations or acquaintances from grammar school appearing out of nowhere for a piece of the action. So tell no one. Put the money in the bank and let it sit for awhile.

2)     They Blow it All Immediately. This is an especially bad choice if you spend the money before you pay taxes on it. In this case, you no longer have money, but you also have to pay money that you don’t have to cover the taxes on the windfall you wasted. Sounds like a mess, right? It is. Avoid this misstep by not spending any money until you have a firm plan with how to best use it. Keep it in the bank until you’re used to having the money at all. When the thrill has worn off, then talk with a financial planner about making this windfall last and grow.

3)     They Don’t Save or Invest. So you have a sudden windfall because you called your annuity buyer. And you spend it on sensible stuff, like getting that bathroom renovation you’ve been wanting. But you don’t leave any left over to invest or save. In six months, you’re back where you started. If you had invested that, with the help of research or a CPA, you could have been making this money work for you for decades.

Windfalls are awesome, but they’re easy to waste, leaving many recipients worse off than before they got the windfall. Don’t let this be you. Make a plan, stick to it, and don’t let yourself (or others) get carried away with your newfound riches. Properly planned, windfall strategies can change your life forever, not just for a few amazing weeks or months.