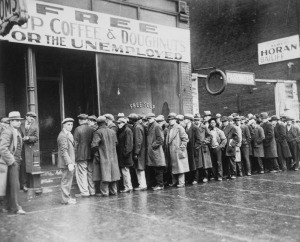 The New York Stock Exchange was founded in 1817 but its origins date back to May 17th, 1792 when a group of stockbrokers and merchants signed an agreement under a buttonwood tree on Wall Street.

This Buttonwood Agreement is the earliest recorded body for trading securities among brokers directly dealing with each other. The agreement assured the signers that when conducting securities sales, first priority would be given to the other signers. The agreement also set a floor commission rate charged to its clients.

In 1817 the stockbrokers of New York decided to reorganize and began instituting new reforms. Modeling their efforts after the board of brokers in Philadelphia, they instituted restrictions on manipulative trading. They regrouped as the New York Stock and Exchange Board and rented out space exclusively for securities trading which had previously taken place at the Tontine Coffee House. They moved several times before settling on the present Wall Street location.

It was the electrical telegraph that was instrumental in advancing the New York Stock Exchange and eventually, New York took prominence over all other exchanges. The Civil War came and went and boosted securities trading along the way. Membership continued to increase and had doubled and tripled by the end of the 19th century.

Security trading gained momentum on the New York Stock Exchange over the next years but was punctuated by many small crashes and panics, the most dramatic of which occurred on Black Thursday, October 24th, 1929 when a major sell off and panic led to a complete stock market crash on October 29, 1929.

After October 29, stock prices moved slowly upward and there was a certain amount of recovery for a short span of time. Generally, however, prices continued to drop and the United States slumped into what was referred to as the Great Depression. By 1932, stocks were worth only about 20 percent of the value they held before the crash. The stock market crash of 1929 was not the only reason for the Great Depression, but it managed to accelerate the global economic collapse. By 1933, nearly half of America’s banks had failed, and close to 15 million people, or 30 percent of the workforce, was unemployed. Families were unable to purchase food and suicide was a popular way out of the terrible situation many businessmen found themselves in.

To prevent future stock market crashes, the New York Stock Exchange implemented a severe fifteen-point program which aimed at providing a certain amount of protection for securities investors. Under President Franklin D. Roosevelt, on October 1, 1934, the exchange was registered as a national securities exchange with the U.S. Securities and Exchange Commission, complete with a president and a thirty-three member board.

Still, the effects of the New York Stock Exchange crash were not fully turned around until the U.S. joined the Allies in fighting against the Axis powers in World War II. This effort was a key element in the revitalization of the American economy and enabled the stock markets to grow and proliferate across the globe.

Despite the small stock market crashes that took place over the last 30 years, equity trading continues to be a popular way for individuals to bring in some extra income. Many investors enjoy the challenge of watching their chosen stock rise and fall in price and making the decision when to sell out is almost like gambling of sorts.  The NYSE stands as a beacon of confidence and trust and will continue to do so for many years to come. However, it would be foolish for anyone to discount the possibility that under certain circumstances, even this symbol of wealth and prosperity could come tumbling down.

By Cina Coren, a contributing editor for DailyForex and a freelance writer for several financial publications.