What are Bullish and Bear Stock Markets? 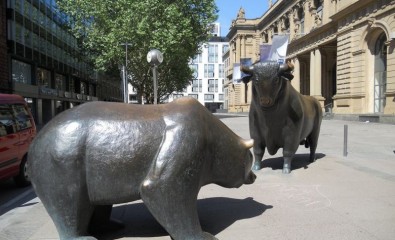 People usually have problems with some of the terms used in the Stock market. Indeed, if you are not  involved in trading, some terms may sound like jargon to you. But actually they are just expert terms used by traders to indicate certain situations in the market. Two common words used to describe the behaviour and status of a given market or stock is bull and bear. Actually bear is the opposite of bull, as each term describes the extreme of a situation. Your Personal Financial Mentor gives you an insight into these two terms as used in the Stock markets. We will try to elaborate what these terms actually mean.

For starters, stock values usually rise and fall variously depending on situations. A certain stock may be rising for a few weeks or month before starting to fall and vice versa. But there are times when these prices rise for long, or the other way round.

A bull market represents a market that keeps rising for period longer that it’s historical average. For example, if a given currency usually rises for an average of two months, this is referred to as its historical average. But when, due to some reason, this market remains on the rise for, say four months, then we say it is bullish. A bullish stock is also one that is rising at a pace that is faster than its usual pace. A good example is the US stock which rose at its all time fastest in the early 90s.

Bullish stocks are usually very attractive to investors because investors see a lot of potential in them.

Bear markets are the exact opposite of bull markets. A bear stock is one that is seen to be falling at a pace that exceeds its usual average. This usually happens when the economy is in a recession and trading is low. An example is in the 1930s, when the US economy was going through what we now refer to as the great depression. During this period, the economy was doing badly and unemployment was very high. American stocks were falling at unprecedented rates and you would call that a bear market.

Although these terms are usually associated with Stock markets only, they can be used in other markets too.

« Common Types of Insurance
Some Basics About the Real Estate Market »

August 7, 2013 What are Bullish and Bear Stock Markets?